Guruvayoor, one of the most sacred and important pilgrim centres of Kerala, is 29 Kms. north west of Thrissur. The main attraction is a temple dedicated to Lord Krishna popularly known as Guruvayoorappan. People throng here in large numbers for worship the year round. 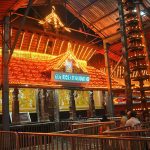 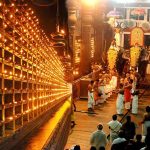 The temple is open at 3 am and closees after the day’s poojas and rituals around 10 pm. Normally there are five poojas and three circumambulatory processions called Sreeveli, propitiating the celestial deities and carrying the Loard’s Thidambu on elephant’s back. During the days of Udayasthamana Poojas there will be a total of twenty one poojas.

On the day of Special Illuminations called “Vilakku” the Thripuka is performed after that. The Sreekovil will be closed after Thripuka. Then the Krishnanattam, a colourful traditional dance-drama on Lord Krishna’s life is enacted inside the Temple on specified days.

** The timings given are approximate. It may vary if there is Udayasthamana pooja or on certain special occasions.